Let’s dig into the AK-47 vs AR-15 comparison debate, and watch the ultimate meltdown of both. Which rifle is better, do you have an opinion?

I have to admit that I fall into the camp that has always considered the AR-15 platform a better weapon than the AK-47 variants. Part of my bias comes from my experience as a grunt in the U.S. Army, and my later use of the AR-15 in law enforcement.

In all fairness, I’ve owned and shot the AK-47 also, but I’ve been a bit snobbish on my love for the Stoner design.

Speaking of which, and not at all relevant to which is the better platform, it’s interesting that the AK-47 is actually the older of the rivals by a good margin. That speaks well of the AK (or Automatic Kalashnikov). The 47 in AK-47 designates it’s year of design and implementation, while the Eugene Stoner designed AR-15 was developed some 10 years later in 1957.

I’ve come to realize that the truth on which weapon is better (the AK-47 vs AR-15) comes down to how it’ll be used.

I’ve found, and most people seem to agree, that regarding accuracy the AR-15 is the clear winner. Though as world conflicts have shown, the AK-47 is accurate enough to do the job it was designed for, so it’s really a moot point in most combat-type situations.

Where the AK-47 seems to come ahead for a lot of people is in its sheer simplicity and ease of operation (and fewer in-battery malfunctions). Though, again, we’re treading on thin ice here because some people, as I’ll show below, believe the AR-15 to be a superior weapon in even that category and back it up with live-fire proof.

For now, I’d first mention someone who I’m an affiliate for, EJ Owens, and his top-notch training programs called Legally Concealed. But specifically to this topic he has a strong opinion on which one of these makes for the better SHTF rifle and it might surprise you. Check it out here. Anyone considering an AK-47 or those on the fence should definitely have a look.

Next, let’s look below at this great infographic provided by TacticalGear.com, and see how they break down the two choices.

AK47 VS AR15 Comparison and Guide

What you see from this AR-15 vs AK-47 infographic is that the AK-47 (in terms of raw data) excels in muzzle energy and price to own, for example, but misses out in other areas like accuracy and service life of the rifle. Let’s compare these two in a few different situations.

The AR15 platform is widely held to be the more accurate rifle, and not by a small margin. Kyle Lamb, a Special Forces operator assigned to Delta Force, was quoted in an article titled “Why the AR-15 Is the Greatest Rifle Ever“, had this to say about the accuracy of the AR-15:

“People hate this gun. Even people on our side. But it is the most modular and accurate battle rifle we’ve ever had on the planet. The AK? It’s great too—unless you’re actually trying to hit somebody.”

It’s beyond the scope of this article to open the discussion as to why the AR15 is more accurate than an AK-47, but it seems to be the perfect combination of a few things… a direct impingement bolt operating system, a perfectly tuned caliber in the 5.56, and superior barrels coming out on stock rifles (among other possible variables, of course).

Though in fairness, modern AK-47’s outperform many of the cheap Soviet-era, communist manufactured AK’s that Kyle Lamb was probably used to in his reference I mentioned earlier. Here’s what James Reeves thinks about the myth that AK-47’s can’t hit the side of a barn.

Picking a winner here is not as easy as it once was. Back in the dark days of the Obama administration things got a little dicey for a while, with 5.56 and .223 rounds demanding a nice little premium.

On the other hand, cheap imported 7.62×39 ammo has maintained a relatively stead price point, though there were some sketchy points as well for this ammo when buyers feared there might be a shortage looming.

That’s as of writing date (7/21/17), so check their site for current sales. Lucky Gunner is one of our preferred suppliers and one we’re affiliated with, so you can save a boatload of money and help us out by checking them out. 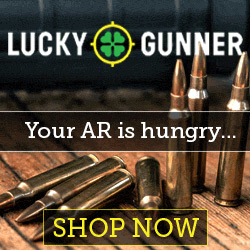 The AK-47 has long been heralded as a rifle that you can shoot rocks through. No matter what you do to it it keeps on slinging lead. I’ve always believed that it was largely the high tolerances built into the rifle (whether by design or cheap soviet-era manufacturing practices, who knows) that gave it this advantage.

Think about it. In most instances we regard high quality items as those with very low tolerances and with a perfect, tight fit. However, in a semi-automatic rifle that might not be a good thing if the gun powder residue starts to build up inside the chamber at too high of levels. But of you’ve got yourself a loosey-goosey AK-47 from 1975 Romania then there’s no problem. :)

Joking aside, these rifles (both platforms) were designed to function in all kinds of conditions and under heavy combat loads. In my experience a new manufacture AK-47 and stock AR-15’s are both reliable given quality magazines and equal ammo.

If you haven’t already, take a look at my article on the AR-15 fouling issue, and you’ll find that surprisingly a properly built and maintained AR-15 can fire without malfunction with the best AK-47.

There’s only one variable to consider when it comes to the home defense debate. And that it the caliber of the ammunition. Specifically, the penetration capability of each round and what that means for you and your wood framed house.

I wrote about the Castle Doctrine vs Make My Day Laws before (and highlight a case where the AR-15 was successfully used in home defense and lawfully, too), but the bottom line is that you are responsible (and criminally liable) for where each round from your firearm lands. So if you successfully defend your trailer house with an AK-47 and full metal jacket ammo (killing the perp of course), but also kill the old man and woman in the trailer next door, you can 100% believe me that you’ll be in deep trouble.

So while you’re legally justified in using either the AK-47 or AR-15 for home defense (and it has been done successfully so there’s not doubt it’ll dispatch baddies quickly), the question might come down to should you depending on where you live and your situation.

Also, for home defense solutions that don’t include a shotgun, I would highly suggest not using full metal jacket ammunition, because those rounds will give you too much penetration in a wood-framed house or trailer. I personally prefer my shotgun for home defense, but other options work, just think about things like penetration.

If you have a unique circumstance and think you might be facing a heavily armed and body armor protected invader, then of course. Just choose wisely, bottom line.

This is where the real fighting begins. People get pissed off about this stuff for some reason. Kind of like a football game where each person has their favorite team!
Like some of these other areas we’ve discussed, at Gun Sources we’ve already written about the use of these weapons for survival. Head over and take a look at that article here: “The Best Firearm For Survival“.

But the bottom line is this, for those who don’t want to read the other article…. how much weight from ammunition can you afford to carry? If you’re in a survival situation weight and space will be an issue. Whether it be from bugging out or simply going on supply runs, or hunting.

In general, here are the weights for 100 rounds of both calibers.

That’s a one pound difference for carrying extra food or water. Or, that’s an extra 40 rounds or so that you can carry with the AR-15 over the AK-47 for the same weight.

Also, think about this. How many homes in the U.S. have an AR-15 versus an AK-47? Exactly. You are much more likely to find parts for the AR15 (and ammo for that matter) than you are for the AK-47. So you have something to think about.

On YouTube Iraqveteran8888 has one of the best (and most popular) channels for gun lovers because of their no-nonsense and gun-loving approach to reviews, gunsmithing tips, tests and plain old fun.

In these two videos we get to see them try to meltdown both the AK-47 and an AR-15. Which one fares the best? You decide.

For me, it’s probably alright whichever rifle you own as long as you take care of your equipment and train with it. Also, make sure that you have extra parts available (they won’t be around in time of crisis) and make certain that you have high quality pins and springs inside (as recommended in the fouling article above).

And be sure to have plenty of ammo stored up, it’ll almost certainly become the first victim of progressive control. Visit Lucky Gunner and stock up when you can.

Support the gun movement or risk losing it all...

More from this Author

I spent most of my early career in law enforcement, working as a Deputy Sheriff, Police Officer, and later as the County Sheriff. I left law enforcement to attend graduate school and entered the private sector as a senior executive in safety and security. These days I'm a consultant, writer, blogger, and web developer.

What do you think about this... Cancel reply

Stock up on ammo!

How To Clean The AR Right

I'm a Democrat like JFK.
He was a Lifetime NRA member.
The radical left has steered our party so far away from common sense values that JFK would be sick to his stomach.
It was a radical leftist (Oswald)
that killed him.

"The right of the citizens to keep and bear arms has justly been considered as the palladium of the liberties of a republic; since it offers a strong moral check against usurpation and arbitrary power of rulers; and will generally, even if these are successful in the first instance, enable the people to resist and triumph over them."